HOUSTON — (January 14, 2015) — The year 2014 enters the history books as a year of extremes for the Houston housing market, as home sales volume and prices achieved record highs while inventory levels tumbled to record lows.

The frenzied real estate activity was primarily driven by the addition of more than 125,000 jobs that attracted buyers and renters from across the U.S. and around the world between November 2013 and November 2014, according to the Texas Workforce Commission.

December single-family home sales increased 11.6 percent versus December 2013 while total property sales rose 11.0 percent. The latest monthly report prepared by the Houston Association of Realtors (HAR) shows that contracts closed on 6,451 single-family homes, shrinking inventory to a 2.5-months supply, the lowest level of all time. Once again, homes from $250,000 and above registered the highest sales volume and accounted for the latest round of price appreciation.

“The Houston housing market experienced its best year on record in 2014 and that is a reflection of the vitality of the local economy,” said HAR Chair Nancy Furst with Berkshire Hathaway HomeServices Anderson Properties. “We expect the pace of sales to normalize this year, which should finally enable inventory levels to grow, restoring balance to the market.”

The single-family home average price rose 6.6 percent year-over-year to $280,863 while the median price—the figure at which half of the homes sold for more and half sold for less—rose 11.2 percent to $209,590. Both figures represent historic highs for a December in Houston, however they did not top the all-time record prices (average of $284,569 and median of $215,000) reached in June 2014.

December sales of all property types in Houston totaled 7,695, an 11.0 percent increase over the same month last year. Total dollar volume for properties sold in December soared 18.1 percent to $2.0 billion versus $1.8 billion a year earlier.

2014 was a record year for the Houston housing market, with strong gains recorded in sales volume and pricing versus 2013. There were 75,319 single-family closings and 91,202 total closings, representing the most transactions in the history of Houston real estate. Months inventory began the year at a 2.6-months supply, and while it crept up to a 3.0-months supply over the summer, it ended the year at a record low 2.5-months supply. Months inventory estimates the number of months it will take to deplete current active inventory based on the prior 12 months sales activity.

Month-end pending sales for all property types totaled 3,414. That is up 9.4 percent compared to last year and suggests another possible increase when the January sales numbers are crunched. Active listings, or the number of available properties, at the end of December declined 8.3 percent from December 2013 to 25,821.

Housing inventory in Houston has been below a four-month supply since November 2012. It first fell below a three-month supply in November 2013, and reached a record low 2.5-months supply in December 2014. Inventory consisting of a 6.0-month supply is typically regarded as constituting a balanced real estate market. For perspective, the national inventory of single-family homes is 5.1 months of supply, according to the National Association of Realtors (NAR). 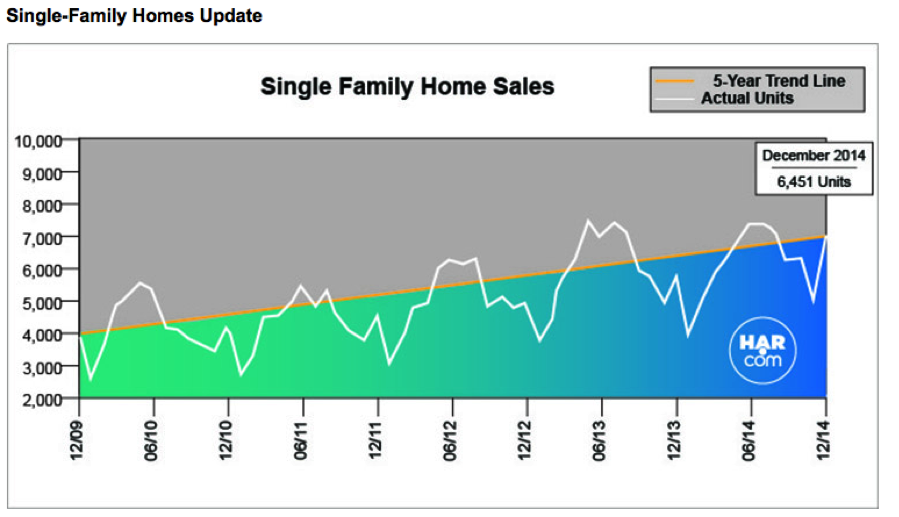 December sales of single-family homes in Houston totaled 6,451, up 11.6 percent from December 2013. Broken out by housing segment, December sales performed as follows: 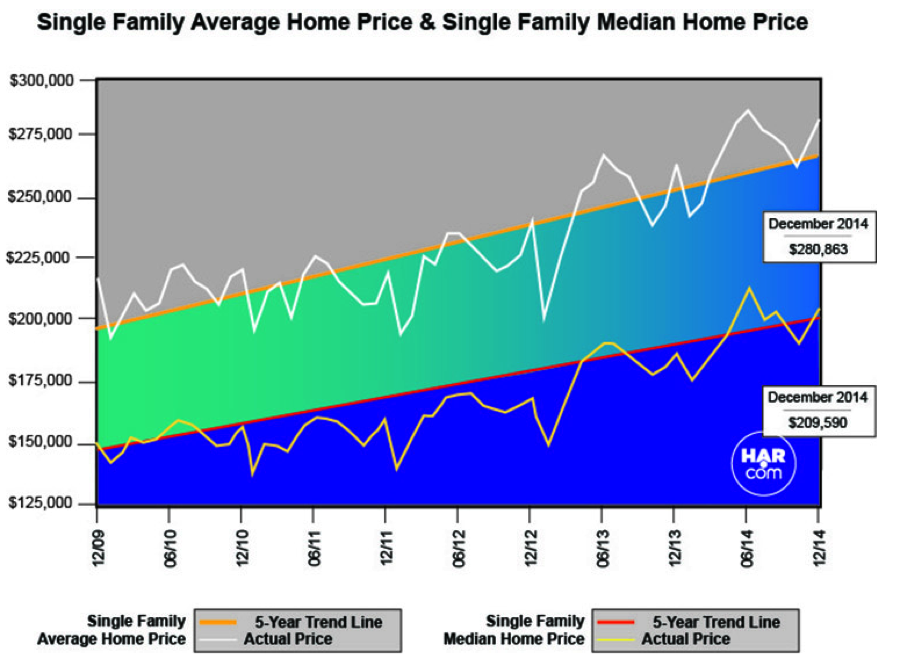 The average price of a single-family home rose 6.6 percent from last year to $280,863, the highest level ever for a December in Houston. At $209,590, the median sales price for single-family homes also achieved an historic high for December, up 11.2 percent year-over-year.

HAR also breaks out the sales performance of existing single-family homes throughout the Houston market. In December 2014, existing home sales totaled 5,384, a 13.4 percent increase from the same month last year. The average sales price rose 2.7 percent year-over-year to $253,108. The median sales price shot up 11.8 percent to $190,000. 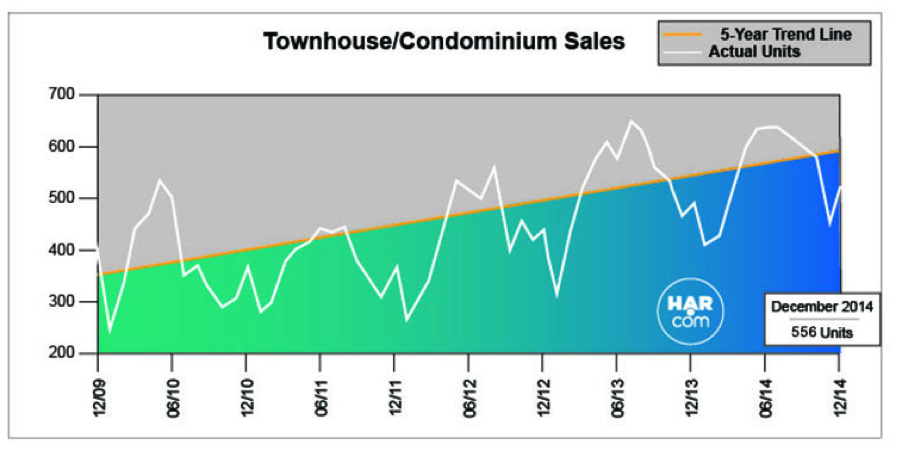 The computerized Multiple Listing Service of the Houston Association of REALTORS® includes residential properties and new homes listed by 29,000 REALTORS® throughout Harris, Fort Bend and Montgomery counties, as well as parts of Brazoria, Galveston, Waller and Wharton counties. Residential home sales statistics as well as listing information for more than 50,000 properties may be found on the Internet at http://www.har.com.

The MLS does not verify the information provided and disclaims any responsibility for its accuracy. All data is preliminary and subject to change. Monthly sales figures reported since November 1998 includes a statistical estimation to account for late entries. Twelve-month totals may vary from actual end-of-year figures. (Single-family detached homes were broken out separately in monthly figures beginning February 1988.)

Founded in 1918, the Houston Association of REALTORS® (HAR) is a 29,000-member organization of real estate professionals engaged in every aspect of the industry, including residential and commercial sales and leasing, appraisal, property management and counseling. It is the largest individual dues-paying membership trade association in Houston as well as the second largest local association/board of REALTORS® in the United States.

→ Memorial Park could see more than $200M in renovations